The Leweton Cultural Group hail from the remote northern tropical islands of Vanuatu and they travel the world performing the Na Mao and Nelang dances as a prelude to the mystical water music, dressed in their traditional costumes of Gaua and Mere Lava made from flowers and leaves, coconuts and pandanus. Their performance is truly mesmerizing as they reimagine the old with contemporary expressions of Matto – bringing together traditional beats and rhythms with ukelele-led melodies and soaring vocal harmonies.  The Leweton Cultural Group will also facilitate traditional weaving, cooking, percussion, and storytelling workshops.
Mesmerising, stirring, unforgettable… the Leweton Cultural Group will add a truly unique performance element to any event. 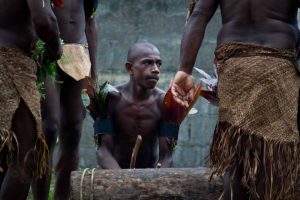 And of course what they are famous for – the spellbinding cultural display of the women from Vanuatu’s remote northern islands as they stand waist-deep in water while swirling and slapping the surface to create a beautiful rhythmic tapestry of aquatic percussion and an hypnotic visual display. 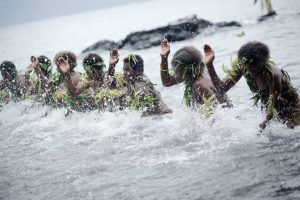 The waters lapping at the shores of your festival will, in the hands of Vanuatu’s Leweton Water Music troupe, become a fluid instrument that produces music to delight families and audiences of all ages. The Leweton group has stunned audiences at World Expo 2008 in Zaragova, several European Union diplomatic functions the Rainforest World Music Festival in Borneo, Bellingen Global Carnival and the Lukaotem Gud Santo Festival.
The Water Music of Vanuatu is a once-in-a-lifetime performance that needs to be seen (and heard) to be believed.

Hilda, Celia, Edith, Anne, Claudia and Melissa are local Ni Vanuatu ladies from Gaua and Mere Lava who now live in Espiritu Santo. The Leweton Custom and Cultural Village perform the unique water music passed down from generation to generation.

Traditionally women from the village went down to sea, rivers or creeks to bathe, to collect food. Having no municipal water supply in the villages all activities centred on and around the water systems.

Standing in a circle or semi-circle washing and bathing the women started playing with the sounds they heard around them from nature and the environment.

Today the unique sound of water music is played all around Gaua and Mere- Lava Island being passed down from Grandmother to Mother to Daughter. The teaching of water music is taught in school to girls only from the age of 6 years old.

On the Island of Espiritu Santo, in the cultural Village of Leweton this unique tradition has been kept alive by a happy and enchanted group of ladies who are enjoying playing with water.

Dressed in the traditional costumes of Gaua and Mere Lava, including arm bands and headwear made from flowers and leaves, the women sidle into a half moon formation. Their bodies lean forward over the water waiting for the signal. The leader’s head dips in a nod. Hands are united in action. The water is beaten into a rhythmic swirl. The palm of their hands slaps each passing wave. Their hands move closer to their bodies and then away again

The percussion sound of unique Water Music fills the air. The glee of the women’s shouts punctuates the music occasionally. With pieces titled “The Sound of Thunder”, “Cascade Falls”, “Big Whale Fish Playing With Small Whale Fish”, “Waves Breaking on the Reef”, the women evoke the sounds their ancestresses have live with for thousands of years. And the crescent formation reflects the way the women have worked standing in a  semi-circle at the water’s edge, or in the river … washing and bathing and collecting shellfish. The sounds they reproduce are the sounds of life and renewal; the past interweaving so completely with the present that its easy to lose yourself in the captivating rhythms

To sit, eyes closed and absorb the sound, it is easy to imagine yourself in a modern day concert hall – and maybe you are! But maybe you are sitting on one of the mystical tropical islands in the northern part of Vanuatu, in the South Pacific. You have just climbed down a narrow well-worn path, through a pristine bush wilderness. Few tourists, except the occasional yachty, experience the joys of being welcomed by these friendly warm people of Gaua.

Each piece lasts for several minutes. The performers are soaked from head to toe. The crowd sits momentarily stunned before breaking into applause.