Author, poet, storyteller, playwright, producer, musician, songwriter, and artist, Marcel Meltherorong, or Mars Melto, as he is known in Melanesia, is at the forefront of Vanuatu’s creative industries. Raised in the colonial war-zone of urban Noumea, New Caledonia, Mars comes from the small island of Vao off the north-east coast of Malekula, in Vanuatu. While still very young his parents moved to Noumea. Suffering under the heavy-handed tactics of the “gendarmes”, Mars moved back to Vanuatu when he came of age. 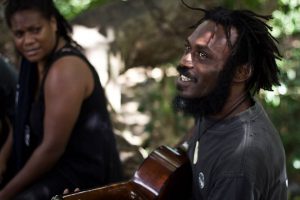 Now prolific, he began his career in music almost by accident. Mars found inspiration in the colonial critique of Bob Marley and the Jamaican music scene. As part of his work with the Alliance Francaise he started mentored Nauten Band from Tanna, helping them with lyrics and musical arrangements.

Back in Port Vila, Marcel became one of the organisers of the legendary Fest’Napuan music festival – the biggest free event of its kind in the region. Inspired by the music scene he started his own band XX Squad. In 1998, Mars almost single-handedly put together the Fete de la Musique concert. He continued to produce these annuals event up until 2007.

By 2003, Mars had established himself as the most gifted songwriter in the country. XX Squad had become the most iconic band in the region and their album Children’s Day was released to critical acclaim. Its blend of socio-political commentary, thoughtful poetry, clever wordplay, and Pacific roots/reggae/ska rhythms make it one of the most popular CDs released in Vanuatu. They performed at the Best of Reggae Festival in Noumea, sharing the stage with Toots and the Maytals and Burning Spear.

After the death of his brother, co-writer, and lead guitarist, Maka “Splaff” Silona, Mars and XX Squad went through a process of soul-searching. The rapid growth of Fest’Napuan in particular, and the music industry in general, created an opportunity for more creative approaches to music. Mars looked around at the state of his country: corruption, police brutality, domestic violence, and the treatment of young people as second-class citizens. With his heart breaking, Mars decided that the only way forward was to recognise the inherent value of cultural heritage of the people and the place.

This realisation was a practical one for Mars and so he immediately began to implement it. He devoted more time to his craft. He formed a new band Kalja Riddim Klan (KRK) that committed itself to producing music that highlights the value of traditional and customary life in Melanesia and the role that traditional values can play in creating a positive future. Fusing traditional rhythms and beats with contemporary and classical melodies, the debut KRK release “Long Taem Bifo” blends indigenous instruments with modern technology, incorporating a diverse range of languages, and exploring issues like land tenure and alienation, inter-generational conflict, customary practices, and cultural heritage. The album heralds a coming of age for Vanuatu music. Since the release of the album, KRK have toured through the region performing all over Vanuatu and New Caledonia.

Marcel balances his commitments to his island, his family, his work, and his art. While being the leader of the KRK collective he is also an ambassador for Vanuatu music. He performed, by invitation, at the Australasian World Music Expo in Melbourne in November 2008 alongside George Telek, David Bridie, Dan Sultan, and Bart Willoughby. In July 2008 he represented Vanuatu at the Pacific Arts Forum in Samoa. He has toured extensively in New Caledonia – both as musician and storyteller. He remains the only ni-Vanuatu person to publish a novel. Recently returned from a cultural conference in Belgium, Mars lives in Port Vila with his wife and two children.