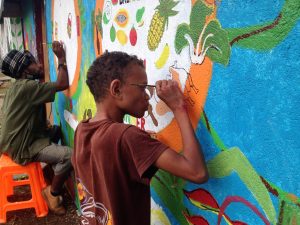 It all started in January, when ten children and their parents attended a “Creative Arts Pikinini” workshop. Inspired by their own cultures and backgrounds and guided by local artists, they used seashells, stones, twigs, seeds, paint and driftwood to produce colourful, exciting works of art. 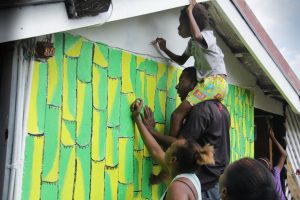 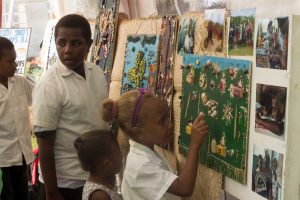 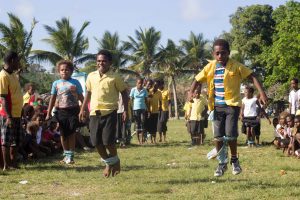 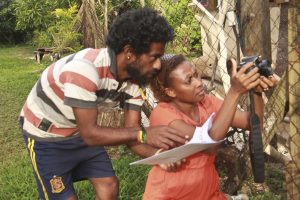 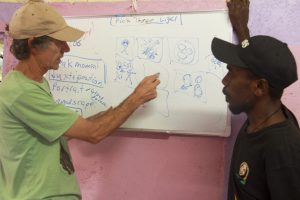 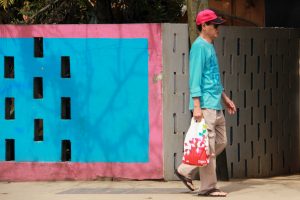 Creative Arts Pikinini was organised by the Traditional Entertainment and Kastom Support (TEKS) Unit of Further Arts, an NGO that works to promote and support artists in Vanuatu.

In July, the Luganville Municipality asked Creative Arts Pikinini to join pupils from Luganville’s schools in painting the mothers’ food stalls at Unity Park, using “Healthy Lifestyle” as their theme. For two weeks they worked hard on their stall, finishing their gaily coloured designs just in time for Children’s Day on 24 July.

This was the big day. A Creative Arts Pikinini exhibition, including photos showing the children at work, was set up in a tent at Unity Park, and the stall painted by the arts pikinini was there for all to see. It was a huge success. Other children and their parents flocked to the tent and showed lots of interest. They were surprised to hear that all the artworks were the result of just one, short workshop and all done by children aged 12 or less. Several parents asked if their children too could become members of the “art club”. Some people who came wanted to buy artworks; they were not for sale, the children kept them and took them home when the exhibition was over.

The big surprise was a visitor from Austria who works to support artists all over Europe. Francesca Hapsburg thought the exhibition was wonderful, really liked the idea of working with children and filmed an interview with Delly Roy, the TEKS Coordinator. Delly explained that she was hoping to run another workshop in August, during the next school holidays, but as yet had no funds. When Francesca learnt how much was needed, she donated the full amount on the spot, in cash!

Late July in Vanuatu is a time for week-long celebrations, with the anniversary of Independence (30 July) following Children’s Day. On the 27th, celebrations included a Trade Show. TEKS took part by organising another exhibition. Colourful photos showed the many different activities of TEKS and Further Arts.  Three visual artists displayed their work at the show. Unfortunately there were not so many visitors, because the day’s programme was not well organised and there were no other activities to attract the public. All the same, it was a top day for TEKS, because it was the beginning of a new relationship between Santo’s artists and the start of plans for their development.

And at the same time all this was happening, TEKS organised a photography workshop under the guidance of VSA New Zealand volunteer Photography Adviser Murray Lloyd. Some great photos of the painted food stall and the two exhibitions were the result.

But Delly won’t have much chance to rest. Coming up on the TEKS calendar are a mini Arts Festival in the Santo village of Vanafo and the next Creative Arts Pikinini workshop.

Financial support provided by UNESCO and the State of Kuwait